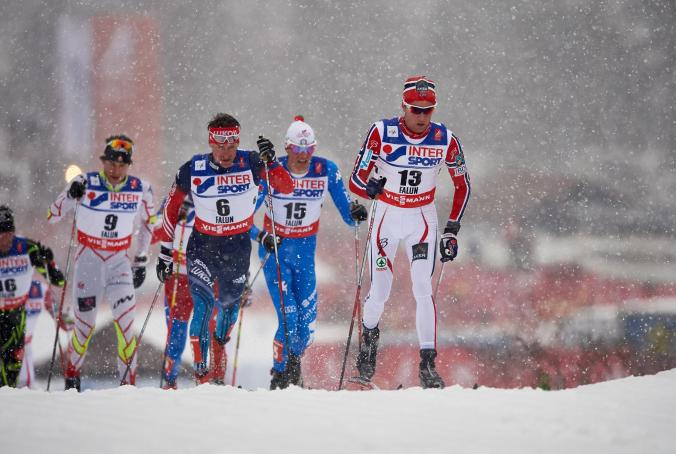 The real actors of the 50 km race

And we don’t care.

We absolutely detest the way Petter Northug races the 50 km. Don’t care if he’s a legend, which is what everybody says today. Don’t care, the four gold medals. Don’t care, the Norwegian Icon. He’s not the greatest 50 km racer, not in this blog.

Your man has the biggest talent, strenght, endurance, power, unbelievable sprint abilities, and not once, NOT ONCE, on Sunday’s 50 km last race of the 2015 World Championships, not once did Northug take his turn in front to pull the bunch like somebody of his stature should have done. And he gets away with this crap e-ve-ry time!

He sat on his ass all day, skiing at the back of the pack, 26 s behind at the 26 km mark, in everybody’s freshly made tracks under sleet, and at the very end, when everybody is completely wrecked, the «legend» powers himself in front and steals a fourth gold medal. It was a steal all right. And people think he’s a great tactician??!!!

Petter Northug better stick to x-c skiing and stay away from pro cycling. He wouldn’t survive a Tour in the peloton. Ever heard of road rash Petter?

We don’t want to sound biased because Alex Harvey was up with the leaders all day. It was not only Alex. It was Vylegzhanin, who put on a fantastic show, it was Olsson who made moves twice to try to get away, it was veteran Lukas Bauer, who was magnificient, it was Dyrhaug and Babikov and Soedergren and Toenseth who all showed up in front in such a grueling, slow race because of horrible snow conditions.

Those are Sunday’s heroes. They put on a show. They made us love the race and this incredible sport.

You’re the reason we love this sport.

JULES BURNOTTE EN VEUT PLUS!
The Gow bros were both solid in the opening weekend of the IBU World Cup season in Oestersund.
Technically and logically (but not yet officially), @kstewartjones has punched her ticket for the Olympic Games. She was all smiles after Sunday's race where she placed 21st in the Ruka WC Women's Pursuit:
CENDRINE BROWNE RAYONNE!
Adam Runnalls is having a very strong start in the IBU Cup with 2 top 10 in a row. He was obviously happy with his 8th place in the Men's Pursuit:
@emmalunds's reaction after Sunday's race where she was top Canadian (42nd, 9/10) in the Women's Sprint in Oestersund: