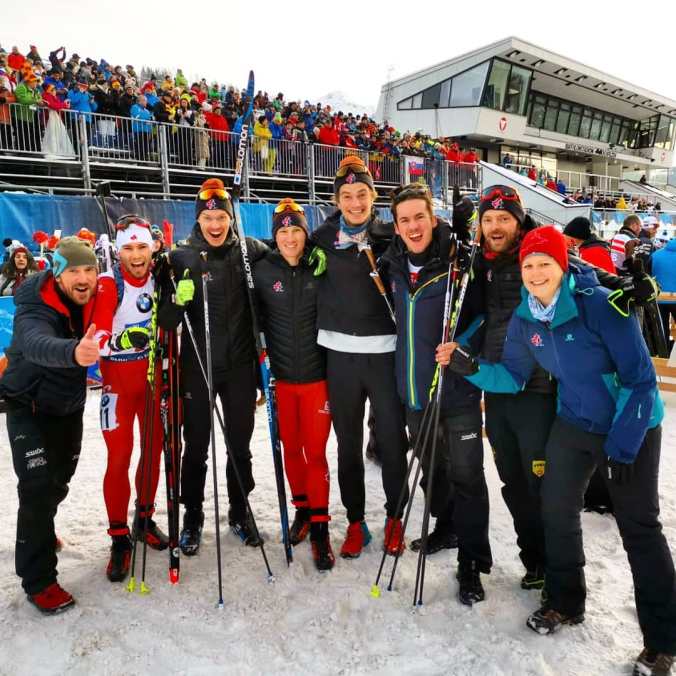 The Canadian women’s relay team had just raked in a mind blowing 5th place the day before. So the men’s squad was pumped up on Sunday to better their own decent 11th place of last week in Oestersund.

Here is how it unfolded.

Things had worked out well in Sweden so Canada kept the same lineup for the IBU World Cup event in Hochfilzen, Austria.

Jules Burnotte started things off again and right away through heavy trafic, racers stepping on each other skis and some falling, we could see the skis were good.

Jules had started 11th and came in for his prone in 5th position. Disaster struck when he clicked into the wind 3 times and came out of the range in 23rd. That was far from the end though for the gentle giant. He pulled a spectacular comeback, the type we see from the likes of J.T. Boe.

Jules moved back up to 19th by the 3,6 km mark. Three hundred metres further, he was 15th. Then he came in for his standing. He shot clean in a stunning 17 s, the fastest shoot time of them all!

Scott was on a good day as well. He kept his position and moved up to 2nd behind Émilien Jaquelin when he shot clean in the prone.

He had dropped to 3rd by the time he showed up for his second visit at the range. But Scott shot clean in the standing and moved into the race lead! A narrow 2,3 s in front of Johannes Kuehn of Germany. Meanwhile Jaquelin missed 2 and dropped to 3rd.

After such an effort, Scott lost a wee bit of steam but still managed to pass the relay to Aidan Millar in 3rd place, 28,5 s behind the now leading Germany.

Aidan Millar. That was another big unknown in this race. Aidan, like Jules, is relatively new to World Cup racing and being handed a relay in 3rd place comes with a mountain of pressure. Would the kid collapse?

Not only did Aidan hold on, he answered with the best racing of his life at such a level. He kept his composure and position through the prone, where he came out 3rd at 36,3 s after missing one.

Then another excellent session in the standing, where he also only fanned once. He was at 43,9s.

Aidan accomplished his mission when he handed the relay to Christian Gow in 3rd place, 52,5 s behind the Germans, still leading. One to go!

If you think Christian Gow would have less pressure because he has more World Cup experience, think again. “I have never been in that situation before and was really nervous”, he said after the race. But it was one of those days for Canada when all the pieces fall into place.

Christian dropped to 4th at the 1,4 km mark behind Quentin Fillon Maillet. They both missed one in the prone and Christian came out of the range in 3rd, just in front of the Frenchman.

Christian Gow at the finish line

He dropped back to 4th at the 3,9 km mark and was to keep his position to the finishing line, as both shot clean in the standing.

In front, J.T. Boe showed once again why he’s on his way to legendary status as he completed a brillant Norwegian comeback and beat Germany’s Benedikt Doll at the line by 2 s!

All in all a tremendous day for the whole Canadian biathlon team. Waxman Andrew Chisholm summed it up pretty well: “Lots of fight in this team. It has been an excellent rebound after a tough first World Cup and a tough sprint. The team’s hard work this off-season is starting to show.”